Wheelwright Museum of the American Indian

Charlie Willeto was a Navajo artist born in 1897. In the Navajo clan system, his maternal clan was Tódich’ii’ni (Bitter Water) born for his paternal clan, Hashtłishnii (Mud People). Willeto’s father was a medicine man or as Navajos call them “hatałii”, which translates as “singer.” His mother was also a medicine woman. They instilled Navajo healing ways in their son, and he assumed this responsibility for his greater community. Being a hatałii, Willeto traveled throughout the Navajo Nation healing those in need with traditional ceremonies and prayer. Charlie married Elizabeth, who was a Navajo weaver and the daughter of a hatałii, and born into traditional Navajo healing arts. They had six children and lived in a traditional Navajo hogan between Lybrook and Nageezi, New Mexico. Willeto supported his family by working in many different jobs, including railroad worker, silversmith, moccasin maker, and later in life as a renowned woodcarver. Contemporary Navajo artist Shonto Begay said, “Willeto beckoned me to celebrate the unheralded visions of my world, including the pain, we as Diné collectively deny so effectively. We were taught to let go of pain by redressing it in beauty.”  *The Wheelwright Museum & shop are open Tuesday – Saturday from 10 a.m. to 4 p.m. and closed Sunday and Monday. General Admission is $8 and special admissions programs can be found at https://wheelwright.org/admission/

Exhibit on the Lower Level of the Museum will run Indefinately 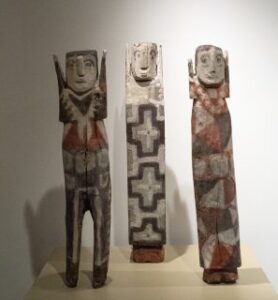