At the core of D1 & D2… rests the personal and creative bond between both artists. It is no coincidence the two have the same first name, as Doug Black is named after Doug Coffin, his godfather. Both originating from Lawrence, KS, Coffin & Black have fostered a decades-long relationship leading up to this show. Throughout the years, artistic harmony grew. When Doug Black began to cultivate his now 30-year stay and career overseas in Japan, Coffin began looking east for inspiration, incorporating calligraphy and Japanese symbolism into his own work. Sometime after, as the two would exchange images of their work, Coffin began to note that he was seeing his own artistic sensibility in his godson, that a real sense of influence was flowing between the both of them thousands of miles away. After Black made a visit to Santa Fe from Japan to see Coffin’s previous exhibition with Ellsworth Gallery, Full Circle: From Far East to Southwest, they began to imagine their work collectively in the space.

Featuring works of Coffin’s signature glass-sphere acrylic paintings, large-scale sculpture, and Black’s expressive ceramics, D1 & D2 gaze down at the earth and up at the sky in awe of the beauty of life’s mysteries. Figures and patterns emerge,—from the past, the future, and the instinctive breathe of our dreams—moving towards a welcoming, contemplative center. 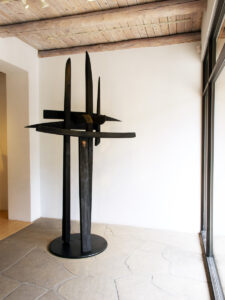 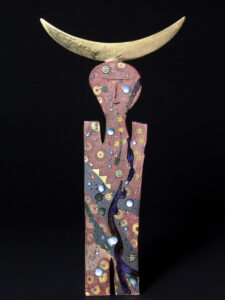