Ken Williams Jr. (Arapaho/Seneca) will be featured with his beadwork at the gallery from 11:00 am to 2:00 pm.  Ken began his career at an early age, experimenting as a self taught artist who learned by observing family and friends. He completed his BA in museum studies at the Institute of American Indian Arts, Santa Fe (2007) and while there took beadwork classes from noted beadwork artist Teri Greeves. Since 2003 he has been participating in the Southwest Association for Indian Arts (SWAIA) Annual Indian Market, Santa Fe and since 2006 at the Heard Museum Annual Indian Market and Festival, Phoenix. William’s work has been widely exhibited and garnered many awards.

Then, from 2:00 to 5:00 pm jeweler Sonwai (Hopi) will be featured with her work.  Sonwai is the artistic name used by Verma Nequatewa.  Verma began working with her uncle, the late Charles Loloma, in the mid-1960’s and continued working with him until his studio closed in the early 1990’s.  At that time, she opened her own studio and has been continuing his teachings through her own jewelry. 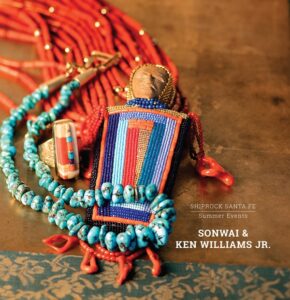